Over the last fifteen years, somewhat sleepy and neglected Port Melbourne has transformed itself into one of Melbourne’s premier suburbs.

The steady infiltration of apartment living kicked off with Beacon Cove and the likes of the converted Sandridge Bay Towers, and has shown few signs of abating ever since. In close proximity the the CBD and holding waterfront views, the area seemed destined to become a high-end residential enclave.

On the back of this, a number of exceptionally designed apartment buildings call Port Melbourne home. Even those of a lower ilk are still far superior to apartment developments found in other parts of Melbourne (hello Preston).

To that end, developers and architects alike clammer to make their mark in Port Melbourne as the freedom of architectural expression, and prices for that matter, are generally higher than elsewhere in Melbourne.

This is purely the author’s opinion, but Armada Port Melbourne is the area’s premier development for aesthetics.

Seen below left, the apartment block was designed by Plus Architecture for developer Buxton Group.

Completed during 2012, Buxton Group’s website describes the development as being sympathetic to its surrounds; make of that what you will, but it’s just a well balanced, incredibly well designed building.

As for current developments, Aqueous Apartments (below right) finds itself under construction.

Concocted by Rothe Lowman for developer Prince Developments, the buildings will carry a unique facade upon completion and continue the evolving Port Melbourne style which generally encompasses 3 level podiums and tower/high-rise setback thereafter.

Housing affordability issues aside, if ever there were a real world example of how to fill in brownfields sites right across Melbourne’s metropolitan area, Port Melbourne is the poster-child.

Overall the striking twin towers that are HMAS Port Melbourne are the area’s tallest structures, comfortably rising above all others as the suburb’s dominant landmark.

Yet what if Port Melbourne were to go truly high-rise either past or future? Would its charm and liveability lessen as a result?

I can’t answer that with any authority, but I can say emphatically that the diversity of design and a near uniform building height suburb-wide as a result of maintaining relatively stringent height controls makes it a great place to meander on a sun-drenched day. The sight lines to the CBD’s skyline aren’t half bad either.

Port Melbourne, like a number of other Melbourne suburbs, does have immense liveability, amenity and heritage aspects to boot.

Whereas some are blatantly against urban development, I’d contend that Port Melbourne is the benchmark for urban apartment design.

Certain areas of Melbourne do lend themselves to highrise towers yet I see Port Melbourne as the clear cut leader in terms of urban development versus design quality versus public and resident amenity. That they’ve managed to achieve this with predominantly mid-rise apartment buildings is commendable.

Conversely readers may be interested to note the Kennett-led government of the day had drawn up plans to transform Port Melbourne into a satellite high-rise suburb similar to Southbank’s expansion plans for the time.

Taken from the Herald Sun and dated 3rd March 1999, the above graphic shows vast areas of Port Melbourne set aside for substantial change. The Gateway to the Bay policy as it was dubbed would have led to Port Melbourne becoming an “International water-transport gateway with new piers and recreation facilities and a high-rise extension of the city and Southbank.”

We're not around right now. But you can send us an email and we'll get back to you, asap. 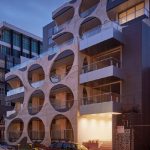 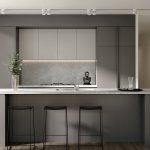